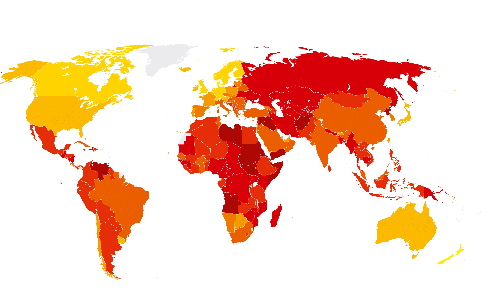 On January 25 2017 Transparency International published the 2016 Corruption Perceptions Index, which reflects non-governmental organisations’ and business world representatives’ perception of public sector corruption and ranks countries on a scale from 0 (highly corrupt) to 100 (very clean). The results are based on 13 research initiatives conducted by 12 international organisations in 176 countries.(1)

Turkey came 75th out of 176 countries (nine places lower than 2015) and scored 41 in the perceived corruption scale. This is the third consecutive year in which Turkey’s ranking has fallen and its score is the lowest that the country has received in the past four years.(2) Turkey came 13th out of the G20 countries, which is one place higher than in 2015. In the Europe and Central Asia region Turkey, came fourth out of 19 countries after Georgia, Montenegro and Serbia, dropping from 3rd place in 2015. Among the 31 EU and Western European countries surveyed, Turkey was given the same score as Bulgaria, which is ranked last in that classification.

Two-thirds of the 176 countries examined in the report received a score below 50, with corruption growing in the majority of countries surveyed. In light of these results, Transparency International has emphasised the urgent need for an action plan to tackle corruption worldwide.

Reasons behind growth of corruption

Transparency International attributes this growth in corruption to:

Conversely, press freedom, an independent judiciary, the integrity of public officials and government expenditure are put forward as factors that can improve a country’s ranking in the Corruption Perceptions Index.

Turkey’s fall of nine places compared with 2015 – despite losing only one point on Transparency International’s corruption scale – was due to the fact that countries such as Sao Tome and Principe, Surinam, Tunisia and Serbia moved ahead of Turkey. Further, eight new countries were added to the list. However, there are also national causes behind Turkey’s downgrading.

The head of Transparency International’s Turkish branch, E Oya Ozarslan, stated that the following factors were behind Turkey’s 2016 ranking:

Despite the lack of a specific anti-corruption law in Turkey, several pieces of legislation cover almost all aspects of anti-corruption, including foreign bribery and money laundering for acts of terrorism. In recent years, Turkey has modernised its criminal procedure law, providing for better due process, and introduced tightened measures against money-laundering. It is therefore clear that Turkey’s lower ranking was not caused by a lack of legislation; rather, it is an enforcement issue.

Turkey has been criticised in recent years by international organisations due to:

To improve Turkey’s anti-corruption ecosystem and international ranking, politicians, practitioners and the judiciary should work to improve the country’s fight against corruption and make it clear that corruption is illegal and punished in Turkey. In order to do so, the following steps should be taken:

*The materials contained on this website are for general information purposes only and are subject to the disclaimer.