INblog > English > Whistleblowing in the European Union and Turkey

Whistleblowing in the European Union and Turkey 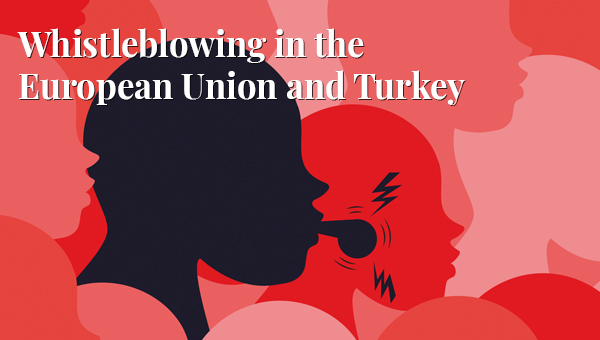 “In a room where, people unanimously maintain a conspiracy of silence, one word of truth sounds like a pistol shot.” – Czeslaw Milosz

Whistle – Blow – Whistleblowing – the term “whistleblowing”, comprising of the words “whistle” and “blow”, historically derives from Anglo-Saxon law and its origins are rooted in referees stopping a game when someone fouls by blowing a whistle or police officers blowing a whistle when someone commits a crime to attract the attention of the public.1  The term itself has evolved over time and has gained the meaning pf “disclosing wrongdoing” or “reporting faulty behaviors.” The term “whistleblowing” does not have an exact translation in the Turkish language; therefore, in many Turkish resources, the term is used as is (whistleblowing). The most accurate use of the term in the Turkish language is “bilgi uçurma”, which refers to transmitting related information.

This question does not have an exact answer in Turkish law since, unlike in the European Union (the “EU”), there is no specific piece of legislation in Turkey that regulates whistleblowing. While the concepts of “disclosing wrongdoing”, “reporting faulty behaviors”, and “leniency processes”, among others, are regulated under various pieces of legislation in Turkey, because the exact term “bilgi uçurma” / “whistleblowing” is not referred to under any legislation, there is no definition for the term in Turkish law.

As a result, the definitions for the term provided by the international

This definition offered by the ILO only regulates “employees” or “former employees”, but is it enough to limit the regulation to only employees or former employees and only provide protection to them, or should the term encompass a wider range of people? Considering the recent legislative amendments, especially in the EU, European legislators may have already answered this question.

Whistleblowing in the EU

The EU adopted the Directive on the Protection of Persons Who Report Breaches of Union Law on 7 October 2019 (“Directive”), which entered into force on 16 December 2019. The Directive provides for the implementation of new comprehensive EU-wide rules on whistleblower protections. One of the most striking elements of the Directive is that it grants protection to a wide range of potential whistleblowers, including job applicants, contractors, volunteers, former workers, and board members, as well as individuals who assist whistleblowers such as colleagues and relatives and even journalists. Through the Directive, this wide range of individuals are protected from employment termination, degradation, transfer or change of workplace, and other discrimination.

Another welcoming feature of the Directive is that its scope has been expanded. “Whistleblowers will be able to sound the alarm on a broad range of issues and remain protected from recrimination.”3 It now includes protection for reports of wrongdoing related to EU law, such as tax fraud, money laundering, product and road safety, public health, and even hot topics such as environmental protection and data protection. The European Commission is encouraging national legislators to extend this scope even further by stating that “Member States are free to extend these rules to other areas.”4 This effort from the European Commission is promising as it sets forth certain requirements to be met by member countries while also providing flexibility for member countries to respond to what their society actually needs. As the deadline for member countries to transform the

Directive into national law is December 2021, many member countries are already working on legislative amendments. The Directive itself and the amendments being drafted by EU member countries to comply with the Directive may have an impact on Turkey as well, as was the case with the EU data protection related legislation. That said, let`s take a look at where Turkey currently stands in terms of whistleblowing.

Turkey ratified the United Nations Convention against Corruption (“UN Convention”) on 9 November 2006. According to Article 90 of the Constitution of the Republic of Turkey, duly ratified international agreements have the force of law. In this respect, Article 33 of the UN Convention calls for the adoption of national legislation to combat the unjustified treatment of whistleblowers who report to the competent authorities. However, no specific national regulations governing the procedures for whistleblowing have been adopted in Turkey yet. Still, as can be seen below, there are certain pieces of legislation in Turkey that provide protection for whistleblowers.

Turkey also ratified the ILO’s Termination of the Employment Convention numbered C158 (“ILO Convention”) on 4 January 1995, and the ILO Convention entered into force twelve months after its ratification was registered as law. Article 5 of the ILO Convention provides that the filing of a complaint or the participation in proceedings against an employer for violation of laws or regulations or recourse to the competent administrative authorities should not constitute valid reasons for termination. A very similar provision is also available in the Turkish Labor Law,5 as explained below.

There are certain provisions under the Turkish Penal Code6 in relation to the reporting of crimes. According to the Turkish Penal Code, any person who fails to report an offence that is in progress to the relevant authority shall be sentenced to a penalty of imprisonment for a term of up to one year. Furthermore, any person who fails to notify the relevant authority of any offence that has already been committed but where it is still possible to limit its consequences shall be sentenced according to the provisions of the abovementioned section. One should note that this reporting provision is vaguely drafted and there are a very limited number of precedents, evidencing that it is an ineffective provision.

The Labor Law provides protection to employees if they file a complaint against their employer to the competent administrative or judicial authorities to follow up his/her rights stemming from legislation or the employee’s employment contract. If the employer terminates the employment contract because of this complaint, then the termination will not be deemed a valid reason under the Labor Law. However, this protection is only in relation to filing complaints against employers. So, what happens in cases where an employee reports a co-worker? What should the employee do if he/she witnesses wrongdoing at the workplace by another co-worker?

There is neither a specific rule nor any right vested to employees to report such behaviors that would provide them protection, but the Labor Law and the Turkish Code of Obligations7 impose a duty of loyalty on employees. In accordance with the Labor Law, acts such as abuse of the employer’s trust, theft, or the disclosure of an employer’s confidential and professional secrets, which are in contravention of the duty of loyalty, are deemed just grounds for termination of an employment agreement by the employer.

As per Article 396 of the Turkish Code of Obligations, employees are also obliged to do their work diligently and to act loyally by protecting the legitimate interests of the employer. In practice, if an employee witnesses any wrongdoing at the workplace by another co-worker, such employee should report this to his/ her employer in accordance with the duty of loyalty.

To Blow the Whistle or Not

There is an inherent duty to blow the whistle if one witnesses actions that may danger the wellbeing and security of society, thievery, fraud, or any situation that may breach ethical rules, morals, laws, regulations and state policies, or discrimination against gender, nation, religion, and race. In summary, all matters that would benefit public welfare should be considered within the scope of whistleblowing.9 But what if the national legislation does not provide sufficient

protection to whistleblowers? In such case, it is the duty of companies, organizations, and unions to provide such protection through internal directives and policies because it is society who suffers when people remain silent against wrongdoing. In order to encourage whistleblowing, whistleblowers must be provided sufficient protection and an effective policy for whistleblowing should be adopted.10 “More people are using their companies’ ethics procedures to report misconduct, and more people are filing whistle-blower claims.”11

In Turkey, many global entities that deem themselves transparent and accountable are adopting internal rules and procedures for whistleblowing and for eliminating retaliation. With guidance from the Directive and the corporate entities taking the lead in the support for whistleblowing, individuals may be more capable of blowing the whistle even when local legislation has yet to be seen.