Why Risk It? The Motivations of a Whistleblower 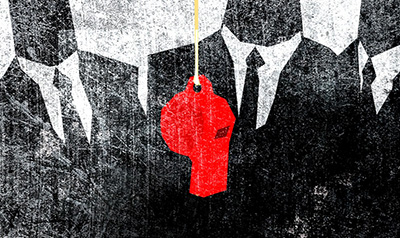 Rats, extortionists, heroes, crusaders – all of these titles have been applied to the figure known as the whistleblower.

Doing away with these charged words, a whistleblower is a person who takes action to halt wrongdoing within an organization, often a company. Usually the public hears about these stories when a whistleblower tips off a reporter or sparks a government investigation. But what motivates whistleblowers to risk so much, namely their reputation, their job, and often their family’s security in order to obstruct the guilty parties?

A prevalent reason for whistleblowing is the whistleblower possesses an intrinsic sense of justice or integrity. When seeking justice the whistleblower is seeking to hold the wrongdoer accountable for the action. A whistleblower can also be driven by a sense of integrity, meaning that he or she takes action because it is the right thing to do. These attributes are often seen in the most common whistleblower, the corporate insider, who reports on the wrongs of their own senior management. Celebrated in movies such as The Insider, these individuals often brave the most frightening of situations when their careers and reputations are put at stake. The most prevalent motivation of an insider is that they wanted to seek justice to hold the wrongdoer accountable or because they simply wanted to halt the unethical behavior.

Another compelling motive can be that the individual is seeking self-preservation. A case that recently received a great deal of press coverage highlighted this motivator. As reported in The Star-Ledger, the whistleblower was a disabled Vietnam veteran named Richard West, who has muscular dystrophy. West, who needs 16 hours of home care daily, found out one day that he was being denied dental work because his Medicaid benefits were used up.

After carefully checking his Medicaid statements he found that the government was being billed for services that he never received. According to West, the overbilling was so egregious that he was being denied essential treatments and thought he was going to die. Understandably so, his reason for whistleblowing was at least partially for survival.

One of the most obvious motivator is that of financial gain. When people, especially cynics, see the damage awards received by Richard West and others, they often make the assumption that the whistleblower was motivated by money all along. Probably in some cases it is the primary motivator, however in the majority of circumstances the evidence suggests otherwise.

Often, no matter what the initial motivation was, a whistleblower can become deeply immersed with their case to the point of obsession. This shows that the motivations of the whistleblower can change over time as they go farther past the point of no return. West said that he had to be unrelenting in pursuing justice, as many of the supposed government watchdogs who he attempted to notify initially ignored him.

A good example of the risk whistleblowers face occurred in North Carolina this year. According to Winston-Salem Journal, a hospital administrator who reported his employer N.C. Baptist Hospital for allegedly overbilling the state employee health plan was fired and sued by the hospital for reporting it. A state audit later concluded that the state did not have a cause of action against the hospital because of lack of timeliness, but that the hospital had behaved unethically. In the end, the whistleblower was left unemployed and, to add insult to injury, became a defendant in a lawsuit.

A final story that shows the breakdown between management and employee occurred within the realm of finance. Patrick Egan, an employee of Latham & Watkins, was fired after he internally reported alleged wrongdoing by the company CEO. After he was terminated Egan brought a case in federal court against the firm for illegal retaliation under the whistleblower provisions of the Dodd-Frank Act. According to the New York Law Journal, Egan’s retaliation case was struck down by the District Court in New York because the alleged fraud was never reported to the SEC. While this may have been a short term victory for Latham, in the long term it will only lead to less trust between employees and management in the financial sector. Now employees are at risk for being fired without legal recourse if they report an alleged fraud internally, meaning that they have a strong incentive to immediately go to the authorities.

There are many motivations that lie at the heart of whistleblowing, and often they mix together and grow stronger as time goes on. From the stories about the whistleblowers who take these risks, it is obvious that they are often people who undergo a great deal of adversity and mistreatment to do the right thing. Going forward, management and companies should understand the value that such people bring to an organization and instead of ostracizing them, take their concerns seriously and appreciate their courage to step forward.

Marlowe Doman is an attorney practicing in New York City.

She may be reached at marloweusa@yahoo.com.